Welcome to Station Lane Stables. We are an equine boarding facility that provides a high standard of individual care for your horse.


Our beautiful property was purchased in August 2007. Alta West Barn Builders then began the task of drawing plans and submitting permit applications for improvements. Approval was obtained and the process began, with moving top soil and staking out the area for a 20 stall stable complete with indoor riding hall. While enjoying a mild winter, construction began in January 2008.


Station Lane Stables was a name that Cheryl came up with, to honour the previous owners of the property. They called the farm their home for 35 years and handed it over in immaculate condition. On the North side of the property there is a beautiful canopied lane complete with benches for contemplation or simply to enjoy the view. This feature is a favourite of Cheryl’s so it was important to her to include the lane in the name of the stable, thereby creating the name Station Lane.


We are always open to accepting boarders, so please contact us to book an appointment to see our facilities and review a boarding contract.

At the age of 13, after years of summer riding camps and riding friends’ ponies, Cheryl’s grandfather purchased Otoe’s Toki, a lovely palomino Quarter Horse, for her. This is when she began her (unknown at the time) life-long interest in dressage with Pat Oxtoby at Bearspaw Equestrian Centre. At age 18, Cheryl bought Frontilly Lace as a two-year-old and spent the next ten years training her to successfully compete at the Prix St. Georges and Intemediare I levels. In 1996 Cheryl traveled with Lacey to Brockville to train with Gina Smith, Olympic Dressage Bronze Medalist, and returned to Trakehner Glen even more dedicated to training and riding Dressage. 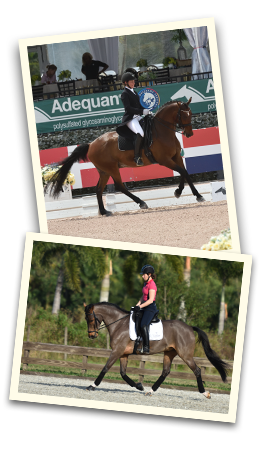 In 1998 Cheryl was ready to start a new talent so she flew to Germany and purchased a 3-year-old prospect, Sergeant. Cheryl continued to work with Gillian Wright at Trakehner Glen to bring Sergeant up through the levels. In 2001 Cheryl moved Lacey and Sergeant to Brockville to sharpen her skills, and competed with both horses under the guidance of Gina Smith. Cheryl successfully competed in Ontario with both horses in Level 4, Prix St. Georges and Intermediare I. Cheryl sold Lacey in Ontario and focused on Sergeant; in 2003 she decided to round out her skills and moved Sergeant to Porcupine Hill in Brockville and began working with Liz Steacie and Sue Rothgeb.


In the fall of 2005 Cheryl returned to Alberta and, after a winter of more skiing than riding, she began refocusing her skills, and Sergeant's, with Bonny Bonnello. Cheryl went on to show successfully in California and Oregon with Bonny.


Cheryl found that one horse was not enough and purchased Luna in the fall of 2007. She is enjoying Luna’s talent and ability as a dressage horse and is excited to bring her along the levels as she has done with all the talented horses that she has had. With Sergeant now enjoying the retired life here at Station Lane, Cheryl found herself once again shopping for another young talent and in the spring of 2016 imported the KWPN gelding Famous Forever.


Cheryl and Famous Forever currently train with Jaimey Irwin through frequent clinics held in Alberta and join Team Irwin in Florida to train and show during the winter months.


Over the years, Cheryl has had the opportunity to enjoy clinics with many talented instructors such as Mette Rosencrantz, Conrad Schumacher, Leonie Bramall, Chrsitilot Boylen, Ellen Bontje, Lorraine Chappell, Cindy Ishoy, Sharon Merkel-Beattie and Holger Munstermann. She has also visited many stables from Germany to California all of which have inspired the facilities here at Station Lane.


Station Lane Stables has been a family project - the entire Roberts family has been instrumental in this massive project. Not only has Cheryl been involved with horses for many years, she has been working for the family business since 1989.


While the construction of Station Lane Stables was the end result of many adventures it was also the beginning of some new ones as Cheryl met the love of her life during the building of the barn, John and Cheryl were married on Nov 21, 2009. John is now an integral part of all that goes on here at Station Lane.